A Scandinavian person claiming to be a student who had his laptop bag stolen will ask you for travel money. It’s a scam

Remember two years ago when I got scammed in the streets of Frankfurt? It seems that person is still at large in Western Europe and they’ve been incidents of people being scammed still in 2011. I just wanted to remind people to be aware and perhaps help other people find out what happened and concentrate photos, aliases and other evidence.

Some more photos of the scammer:

The scammer has also been known to claim he is from Norway as well. Sometimes he is encountered along with a partner.

Fake Papers sent as proof commonly: These are edited from scam to scam it seems. The name of the “father” sending the money changes. You can see below it being “Henrik Jensen”, “Olaf Nelson”, “Erik Janson”, “Olaf Jensen” and so on. 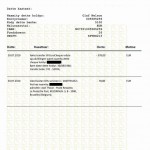 The “father” is commonly using a @hotmail.com, @live.com or @windowslive.com email address, which makes it difficult to trace. I’ve already tried contacting Hotmail to get more info but was promptly ignored. Still looking at the headers of that email, I’ve managed to trace the father sending it from a Spanish ISP (which I’ve also contacted with no success).

Someone claims they used the +44 7854270100 phone number, but is not clear if this is the phone of the scammer or the “father”. This is a German number. It may be the case that the scammer has scamming partners all over Europe and calls whoever is convenient. This seems consistent with the other samples of emails I’ve seen, where the English was even worse than the one I received.

This person is a really, really good actor, with a very detailed, sad and believable story. He will talk about his family, he will show you pictures of his “house”, he will give you a fake skype address (same as his name) he will talk to you on end, without any stress or fear. He has done this dozens, if not hundreds of times. This person is absolutely shameless as well. He guiltlessly accepted an offer to buy him dinner and then bargained for 50 extra euros (with more sad sad stories).

If you see him, what you do is up to you, but by the time you realize you’ve been scammed (usually after 2-3 days when you realize the “money transfer” is not coming) your Police department is probably going to be useless. He’ll be long gone to another city or country by then.

Anyway, spread the news and info around and hopefully the more people aware of this scam, the less likely it is that they’re caught unaware and lose their goodwill by being scammed when trying to help someone in need. Also if you’ve been scammed and managed to grab more info (email addressed, aliases, photos, phone numbers) contact me and I’ll add this to the list. If you’ve written about this, link it in the comments and I’ll add it to the list.

The more people who know about this, the more likely someone will recognise him during the act and take action to stop him or at least make the victim aware.

Take care and don’t lose your mutual aid feelings just because of this scumfuck.